This is one of the triple leveraged funds which Prasad had asked me to come up with a low drawdown trading strategy for,  I'll be looking at the others soon. You can set up SignalSolver to optimize for low drawdown. The way you do that is by setting up the Figure of Merit parameters to look for low drawdown, however you need to fold return into the picture, otherwise it simply comes up with algorithms that don't trade and have zero drawdown. In this instance I set the FOM parameters to be Total Return (25%), drawdown (100%) and Min Quartus Return of (25%). The data is divided into four quartus's, so including Min Quartus Return gives more consistent returns than just including Total Return.

A few things to note about this result. The drawdown (the worst case loss you would have suffered if you had entered and exited the strategy once) was 4.5% compared with the underlying stock's drawdown of 24%, and the total return beat the return of the underlying stock (56.7% annualized vs. 41.7%).  Its a long-only strategy. If you had shorted instead of exiting, the drawdown was close to 30%. The trading strategy was also very efficient, that is, the returns were good given the small amount of time (20%) you were in the market. If you could have invested at the same rate of return during the 'out' periods, you would be talking about a 288% annualized return (a figure I call Efficiency).

The trading strategy didn't trade frequently, nor was it particularly consistent in its results, as you can see from the last two graphs below. Also, its not particularly stable with respect to the buy and sell point percentages as you can see from the surface plot. None of these factors suggest a strategy worth pursuing--its really just a curiosity, a demonstration that you can find low drawdown strategies that worked if you look for them.

One last point of clarification, the buy signal is a negative percentage (-3.74%) with respect to the reference (the 50 day simple MA). If you were waiting for a buy signal and the 50 day SMA at the previous daily close was at $100, then the buy signal would occur if the stock price failed to rise above $96.26, assuming no sell signal. Buying was done at the subsequent open, selling at the close on the day of the sell signal. 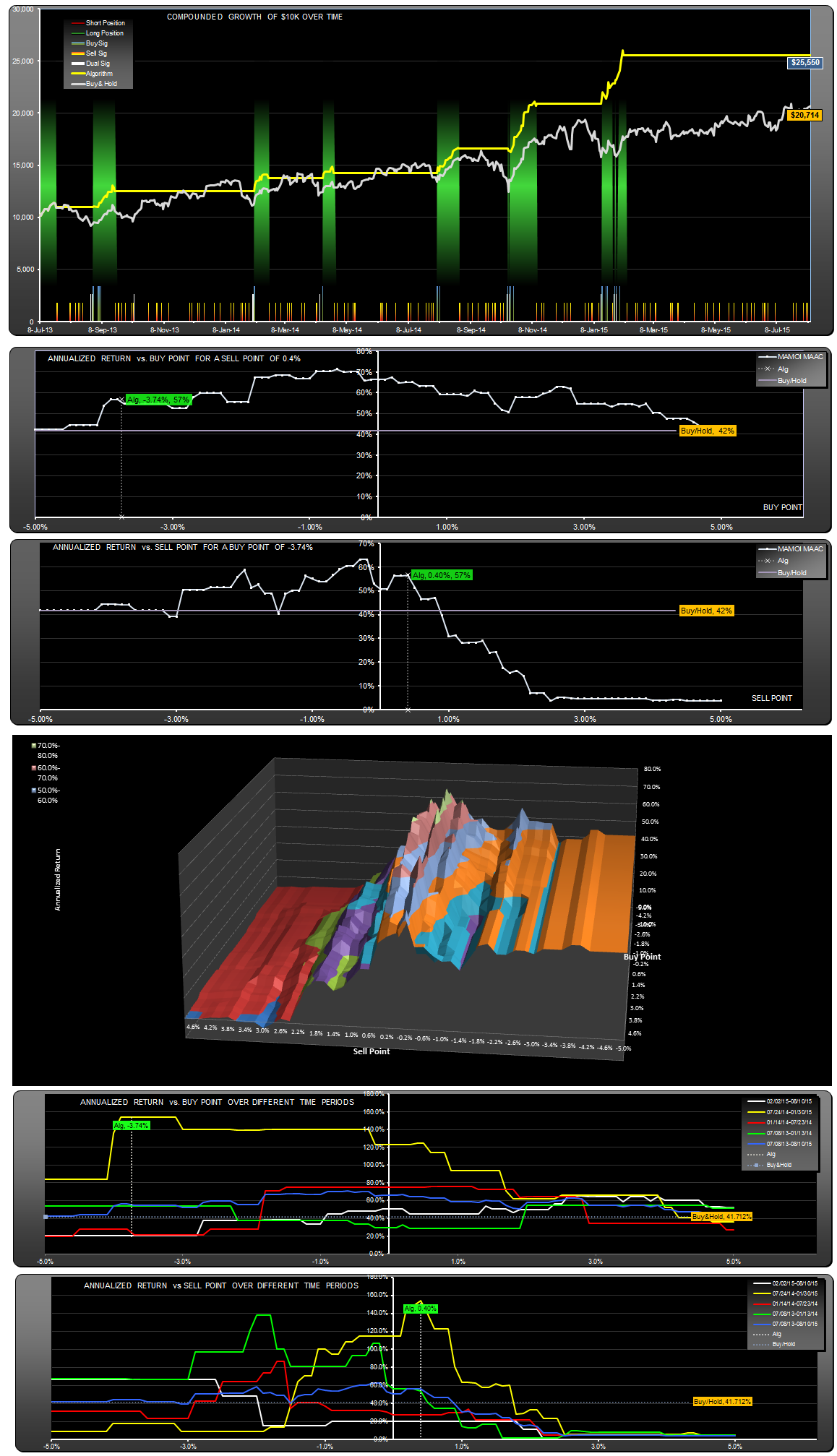 Post has been corrected 1-2-15 for an error in short-hold calculation.

Low drawdown did not last, but did better than buy-hold: