This AAPL trading strategy would have given a return of $31,712,009 for every dollar invested in December 1980. That's 123,000 times better than buy-hold, with nearly four times the annualized return (61.4% vs 16.7% for buy-hold) and roughly half the drawdown whichÂ  amounts to over six times better reward/risk than buy-hold.

This is a variation of the MASC BAO algorithm which I have published before,Â  except this time the buy point is related to a Bollinger Band instead of just the sell price. I found it using SignalSolver.

Here is the strategy:

In this case the Bollinger band is the 7 period StdDev of median prices (monthly (H+L)/2), and the band is built around the last sell price, not the usual method of building it around a moving average. A little unconventional but it worked wonderfully. Algorithms with buy signals based on sell price often get stuck, but this one didn't. Sell signals were based on a raw Percentage Band built around the monthly median (H+L)/2 prices, just like the original version of this.

Here is the equity curve:

We are looking at quite a bit of reinforcement on buy signals, but sell signals tend to come in ones or twos. There are some dual signal months but not too many. Dual signals will trigger a trade for this algorithm.

Moving onto the scans, you can see that there is a single area of profitability:

Getting the buy or especially the sell point wrong would have led to a complete loss, as this algorithm was run Long and Short (you were either long or short at all times). Here's the entire parameter surface, for completeness: 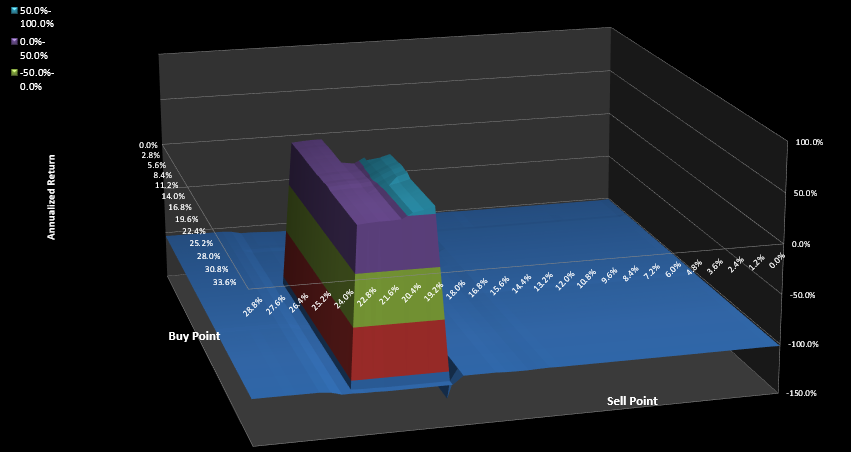 A bit of a steep sided mesa, but a reasonably large plateau.

Since I found it in June, the algorithm has added about 3%, but it hasn't traded and is still long.

Just to round this out, the algorithm finally hit the dust in Aug 2020 making a total loss. Here's how it performed since its original publication in 2016. A mixed bag really, It kept you on the right side and did around 30% better than the underlying until about 3 years after publication, then broke down.  Like all algorithms based on backtests, they work until they don't. And you can't predict when the end will come.

In case you are wondering, re-parameterizing would have helped. A sell point of 27.28% or greater would have given you the same result as buy-hold, but without trading, so not terribly meaningful. But that's the best possible outcome for this algorithm over the last 5 years, a 45% annual return.